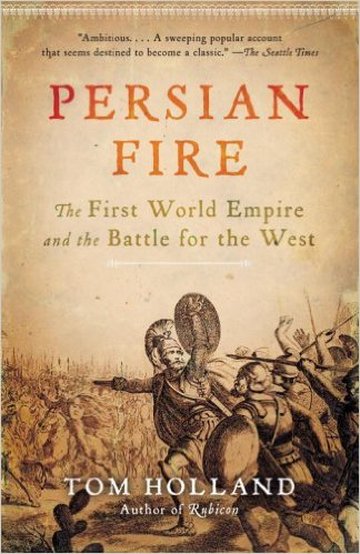 ﻿﻿Persian Fire: The First World Empire
and the Battle for the West
By: Tom Holland
Blurb:
"In the fifth century B.C., a global superpower was determined to bring truth and order to what it regarded as two terrorist states. The superpower was Persia, incomparably rich in ambition, gold, and men. The terrorist states were Athens and Sparta, eccentric cities in a poor and mountainous backwater: Greece. The story of how their citizens took on the Great King of Persia, and thereby saved not only themselves but Western civilization as well, is as heart-stopping and fateful as any episode in history. Tom Holland’s brilliant study of these critical Persian Wars skillfully examines a conflict of critical importance to both ancient and modern history."

The Short and Sweet:
Persian Fire by Tom Holland is an exploration of the ancient world, more specifically the Persians, Spartans, Athenians, and a myriad of surrounding neighbors. Familial lines, decisive battles, political intrigue, and philosophies are discussed.

What I Liked About the Book:
Being an American, but having Iranian blood, I was interested in reading a non-fiction about my progenitors. And no, Frank Miller, 300 (albeit entertaining) was a horrible representation of ancient Persian culture. Anyway, you would think an American-Iranian would know his history, but sadly, I do not; it was never explained to me. Tom Holland, however, picked up my parents' slack. He explained Persian history as if it were a documentary on the History Channel. The read, for the most part, is brisk, creative in its execution, and above all else, entertaining. I learned about the giants of their age: Cyrus the Great, Cambyses II, Darius the usurper, Bardiya, Miltiades, Leonidas, and all the other super interesting names of that era. So. Much. Knowledge. I loved finally learning all the things I haven't known for all these years.

What the Book Lacked:
Having picked up a book called Persian Fire, I was expecting an overload of information about the Persians themselves. However, Holland discusses a number of other tribes to tiring lengths. There are tons and tons of books that revolve around the Greeks. Heck, most Western philosophy books cover the history of the Greeks, as well. So, when I pick up a book that alludes to covering the not-so-well-known aspects of the Persian empire, but discover a huge portion of the book is dedicated to the Greeks, I was quite disappointed. And that's just not my bias talking; if you had picked up a book about the American Revolution and halfway through the author started discussing Napoleon Bonaparte for the other half, you would be upset, too.

Will I Be Reading More From These Authors?
Despite Holland's tangent into the daily lives of Spartans, Ionians, and the rest of the Greeks city-nations, he does a great job of making history entertaining (something not many public schools can do). That is enough of a reason to read more of his work. I highly recommend buying his books, but if you're unsure, go to your local library and borrow one.

Conclusion:
Persian Fire is a page-turner. There are some parts that I wish were saved for a different title, as it stole the spotlight from the Persians, but in all, I do not regret reading Holland's work. I am definitely interested in reading more of his books.
Click to see the book on Amazon
June 2015 Notable Reviews
May 2015 Notable Reviews
Powered by